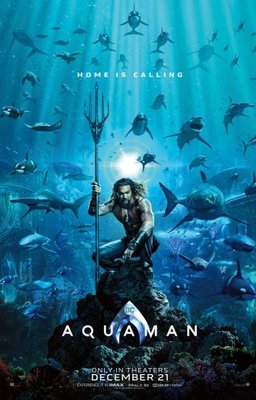 Arthur Curry learns that he is the heir to the underwater kingdom of Atlantis, and must step forward to lead his people and be a hero to the world.

It would be an understatement to say that DC has had a bumpy road recently, churning out deeply flawed movies back-to-back in an attempt to replicate Marvel’s success with its own cinematic universe.

Where Zack Snyder brought promise to DC, bringing a grittier and darker tone to superheroes similar to what Christopher Nolan did with the Batman trilogy and serving as a perfect counter-balance to Marvel’s light-heartedness, DC and Warner Brothers intervened in the sake of profits.

Batman v Superman (or as I like to call it: BS), Suicide Squad, Justice League, time after time again one can see the direct studio intervention in the form of reshoots, forced light-heartedness, and editing the run-time. This intervention not only dilutes the quality of the film in terms of plot coherence, but also profit (ironically the very reason these studios intervene in film). Aside from Wonder Woman as an outlier, the DC cinematic universe has been on a downward spiral ever since its inception in 2013 with Man of Steel.

With planned standalone films such as Flash and Aquaman being postponed indefinitely, Aquaman in a way is DC’s last hope to saving the cinematic universe.

On paper, Aquaman has a lot going for it. Directed by horror-mastermind James Wan who found blockbuster success directing Fast & Furious 7, and powered by stars such as Nicole Kidman and William Dafoe, it was hoped that Aquaman would learn from the mistake of its predecessors and deliver an original and cohesive storyline.

Unfortunately, Aquaman feels like the aquatic extension of a Transformers movie, mashing what 3 movies into one tenuous storyline, covered with Michael Bay’s CGI pornography, and bloated with so many one-liners in a desperate attempt to make the audience laugh that it makes you want to cry.

People who praise Aquaman for its self-awareness as to its own goofiness is like when I hand in an essay to my professor: just because I know it’s trash doesn’t make it gold.

In its 143 minute runtime, Aquaman tries to explore the superhero’s origin story, the world of Atlantis, and his rivalry with Black Manta. While all of these different storylines had promise, they each require independent treatment. By mashing them all together into a melting pot of a movie, instead of leaving opportunity to explore these storylines in future sequels, Aquaman oversimplifies these stroylines into child-like tantrums. Black Manta, Aquaman’s mother, and the kings of Atlantis are all reduced to either plot-devices, characters that serve to deliver exposition, or just to have them get thrown around by Aquaman. This removes any notion of character development for Aquaman, who treats his own progression from fish man to fish lord as a joke.

This leads to simply wasted potential. With such a talented cast, one would have hoped for some depth to the characters and meaning to the overarching storyline as a result. Instead their talents are wasted by acting out the cardboard cut-out characters that have been written for them. While Jason Momoa can be charming, with such a long run-time he ends up becoming insufferable.

One thing that can be praised about Aquaman is its beautiful cinematography. Where fight scenes are excellently choreographed and removed of the nauseating shaky-cam we’re used to seeing. CGI is largely well implemented and the score is fitting. So audiences will find some comfort in the beauty of the spectacle on screen, at least before the run time starts dragging it out.

All in all, Aquaman will most likely be the death knell of the DC cinematic universe, and that’s probably a good thing. If film studios want audiences to invest their time and money into their cinematic universes by going to see each new entry, they must learn to do the same. It is DC’s desperation to match Marvel which led to the financial losses and bitter distaste in audience’s mouths after leaving the cinema time and time again. Perhaps with Aquaman, DC can hit the reset button and take time to plan anew.