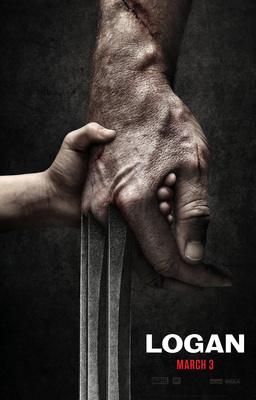 In the near future, a weary Logan cares for an ailing Professor X in a hideout on the Mexican border. But Logan's attempts to hide from the world and his legacy are up-ended when a young mutant arrives, being pursued by dark forces

Around this time last year, I wrote in my review for Deadpool the growing concept of ‘superhero fatigue’: this exhaustion of big budget and formulaic superhero movies released each and every year. Ever since the original Iron Man in 2008, there has been an increasing amount of superhero films released each year as powerhouses like DC and Marvel seek to build their ‘cinematic universes’ through an endless series of team-ups, sequels, spin-offs, prequels, and just about any other excuse to make another quick buck. Deadpool broke that trend by being a satire on the superhero genre, making fun of the conventions and utter clichés that we’ve come to see in these films. Now a year later, Logan tries to do the same but with a tone of realism and darkness to it. Marketed as a swan song to the beloved Wolverine character, this film features no flying superjets, tight latex costumes, or over the top stakes. Instead, in this Trumpian apocalyptic America, we find our beloved Hugh Jacked-man as a helpless drunk going on a rage tantrum every time he’s dragged into the superhero world he so desperately wants to leave, enriched with that sense of realism and depth to Logan’s burdened and repenting character. However, its glorious realism is short-lived when our antihero finds himself being bossed around by a group of pre-pubescent 12 year old mutant brats and a villain who’s so short-scripted he seems like he came out of 50 Shades of Grey. Ultimately, it’s Hugh Jackman and mentor Patrick Stewart which serve as the biggest attractions to this film, but outside of these two actors the film crumbles as it struggles to build an atmosphere with characters which embrace the innovative depth and realism Logan tries to convey.

I’m not an adherent viewer to the X-Men/Logan movie timeline as the past portfolio have movies who’ve recklessly, albeit sometimes necessarily, jumped back and forward in time so many times it gives you a migraine just thinking about it. Instead of stacking up the plot against the bigger picture of the ‘X-Men universe’, I’m going to focus on how the plot stands on its own. As a road-trip-esque movie, Logan finds himself having to drive this kid mutant alongside a deeply-ill Professor X from point A to point B to prevent some big bad multinational corporation from re-capturing what they see as not a kid but a piece of R&D. What truly stands out is Logan himself, who makes it known from the very beginning that he’s not a superhero and he’s tired of saving everyone from their problems. Dragged into this mess, we see his persona contrasted with the ever optimistic yet forever crippled Professor X who believes that one must not give up hope. This battling of utter selfishness and perpetual altruism plays out nicely in a world which presumably wants nothing to do with mutants. We see Logan truly open up as the film progresses about the emotions he’s so deeply buried in a warrant mission of self-destruction. He’s ashamed of who he is and in a somewhat primitive yet interesting way, the film conveys how his own monster consumes him. That being said, the further you look away from this central attraction, the more you start to see all the holes and loose ends built around the film like the fact that the film’s whole premise is based on a plot exposition primitively conveyed through a smartphone video or that the villain is ultimately irrelevant till he reveals his identity and mandate in the last few minutes of the film. The band of baby mutants felt forcefully shoehorned in as a film executive decision to pave the way for expansions in a film whose ultimate objective was to present itself as distinct from the rest of the superhero universe.

In regards to acting, Hugh Jackman and Patrick Stewart deliver powerful performances for a proper exit from the X-Men universe. Their chemistry on screen is addictive and admirable as their aging from their first X-Men film so many years ago is not only present physically but also in their portrayal of their characters. Much like the film’s plot, the actors outside this multi-faceted duo is serviceable but nothing outstanding or contributable to the film’s overall product.

What will really surprise and attract viewers is the cinematography as all the sanitized PG censorship has been removed from Logan. Limbs are teared off and skulls are teared into, making the action montages sadistically satisfying as our beloved Logan goes on a tantrum ripping into every guy with a gun on the screen. Coupled with this intensity we are presented with a predominantly mid-west scenery and Johnny Cash-like soundtrack, giving it a feel of old age like an aged Western. These technical aspects enrich the sense of finality, a closing to a story which has been spread over so many years.

Many have been calling Logan a masterpiece, which for as gripping and innovative as it is, I must disagree with as there are glaring aspects that not even our perfect protagonist and mentor can cover up. What Logan does serve on a greater extent is a support line for the superhero franchise, as its team up movies and spin-off start to dry up. Replace explosions and spaceships with a bit of good ol’ heart and soul and you just might not only prolong the superhero genre’s life span, but have viewers see it as something more than just by its by-the-numbers blockbuster tag.