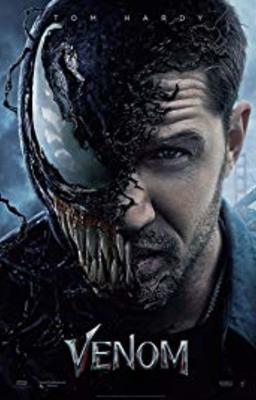 When Eddie Brock acquires the powers of a symbiote, he will have to release his alter-ego "Venom" to save his life.

Venom, in other words what would happen to Spiderman if he decided to take steroids. Venom is supposed to be Sony’s start of what you would call the ‘anti-superhero’ universe within the superhero universe within the ‘let’s milk our franchises universe’ that is Hollywood. Before its release, Venom had all the signs of being a bad movie: it’s been in production since 1997, it’s been given a PG-13 rating for a character who’s notorious for R rating action, and Tom Hardy’s favorite scenes were the 30-40 minutes that DIDN’T make the final cut. Venom seemed less like the masterpiece fans asked for and more like the culmination of the producers’ resilience as they dragged the film through the mud that was its production. Critics saw it as much as they stood in solidarity for Venom’s awkward tone and looking like a film made in 2004. Yet despite all that, I was really looking forward to Venom. With Tom Hardy taking lead role and having the supporting cast of Rez Ahmed and Michelle Williams to tackle a character who is the very antithesis of Spiderman, it couldn’t be as trashy as critics say it was…right?

Truth be told, Venom wasn’t the movie I wanted but it was one that I somewhat enjoyed. Choosing an unconventional dark humor approach that mostly works because of Hardy’s witty dialogue with himself, Venom manages to make audiences forget long enough that its plot was written by a 12 year old and its intentionally nauseating action scenes to avoid an R-rating to go along for the ride.

Because objectively speaking Venom was written by a 12 year old. Riddled with inconsistencies ranging from a villain whose world view is summed up with “the world is going to hell so lets bring hellish aliens” to an anti-hero’s epiphany of “I was going to feed off your planet and kill you but since we’re both losers let’s be friends and save the world”, Venom’s storyline on paper comes off as a B-movie that wouldn’t have even made it on Netflix. Perhaps all the deleted scenes would have provided us with the context viewers needed to piece this plot together, but without it Venom’s storyline treats its viewers as the 13 year olds the film studio so aggressively fought to allow to see. Yet Hardy’s dialogue and bond with Venom shines through this mess keeping the viewer entertained throughout the film. The dark humor almost goes as far as to imply as if Venom was self-aware of its trashy plot and decided to go for a Sharknado vibe while still feeling somewhat serious.

Tom Hardy really is the sole star of the film as its supporting cast are recyclable. Rez Ahmed, talented from his wonderful performances in HBO’s The Night Of and Four Lions, is wasted here playing a cartoon villain. He’s simply unbelievable as a menacing villain or let alone a mastermind, evoking the same monotone in every scene he’s in. Perhaps if his character was given more to play with Rez could have posed the serious counter-balance to Hardy’s dark humor. As for Michelle Williams, her relevance to the story is unnoticeable, walking in and out of the film’s story just to remind us that she still exists. Her chemistry with Tom Hardy was weak and her character was just plainly uninteresting.

Venom’s action scenes only offer the joy to fans of seeing Venom fighting on the silver screen, and even then this joy is short-lived. The scenes themselves, few and far between, have been intentionally shaky-cammed so that the viewer cannot see what’s going on. Venom will prepare to bite a person’s head off in one scene and in the next all you see is a bystander’s reaction to the event. Without any blood in this movie, for all we know Venom could have been eating a PB+J sandwich or downed a kale shake (truly shocking behavior). This only serves to undermine the credibility of the gory character’s portrayal. In a world where it’s been proven that R-Rated superhero movies are profitable and critically acclaimed (e.g. Logan, Deadpool, Deadpool 2), the explicit refusal by Sony to give fans what they want and instead to focus on a PG-13 rating for ‘future world building’ seems not only counter-intuitive but down right offensive.

To sum up, Venom is the embodiment of ‘wasted potential’. Had the film been given a longer leash to play around with the character, Venom could have justified the decades of production that went into it and been a film fans could be proud of. What little promise the film does have in its dark humor may be enough to have fans eager to see a sequel, but only if changes are made. Fool me once shame on you, but fool me twice and… I won’t even bother writing the review.